We recently had our Spring Fine Arts program at the school and all of our bands had the opportunity to show what they had been working on this year and the progress they have made.  What an enjoyable evening it was!
I don’t know about you, but I have always been a little partial to the incredible music that can be made by a group of people in concert with one another.  The incredible melding of sounds and blends and movements of each person doing their part to produce a sound that expresses emotion and beauty is something that moves me deeply.
None of that could happen without the presence of the conductor.  When you think about it, it may not seem like the conductor plays a very important role.  They don’t even play an instrument in the band that contributes to the sound.  They stand in front, waving their arms in the air, which upon examination, seems a bit futile to produce any productive sound.  Yet a conductor is critically necessary to a band.  While performing without a conductor may work for a small ensemble,  even a moderate size band would not be able to have the precision necessary to stay together through the various movements of a piece of music without a leader.
The conductor does more than just start, keep, and end the band together.  With each sway of the wand the conductor is able to draw out of the individual players, and the band as a whole,  the finer nuances that make instrumental music so dramatic.  Even one musician not in tempo with the rest can spoil a beautiful piece.   The conductor knows the piece and how it should sound.  It is his purpose to bring even the weakest of the musicians to their highest potential to achieve glorious sound. 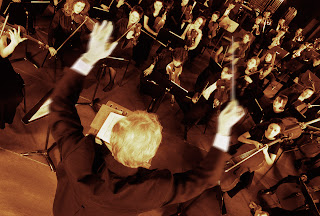 As a youngster, I took up percussion and played in the band until I graduated high school.  I have been part of some pretty incredible bands with more than able conductors.  The one thing that was impressed upon me from the beginning is that I must keep my eye upon the conductor.  Yes, it was necessary to view the music, but my body was turned, my stand was set so that with everything else going on around me, I could still see the conductor.  I, along with the rest of the band, was to “fix my eyes.”
I know the imagery of Hebrews 12 is not that of a conductor of a band, yet I think the principle in mind is the same.   Jesus is the conductor of the band in which each believer plays an important instrument.  Not all instruments are the same.  Not all carry the melody all the time.  Some, like the percussionists, rarely do.  Yet each part is critical to the piece.  The only way we are going to pull it all together and produce the beauty entrusted to us is if we keep our eyes fixed on Jesus, the conductor, and follow His direction.   With every wave of His baton, we seek to anticipate His desire.  His will becomes our will.  Ultimately, when the score is complete, it is our ultimate goal that He may turn to His audience, His Father, and take a deep, well-deserved bow.  For He is our Conductor and is worthy of all the praise.