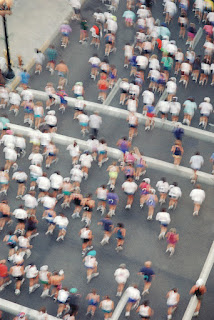 I find it providential that last summer the leadership team at FCS decided to make 1 Corinthians 9:24 the theme verse for the 2012-2013 school year. You are probably familiar with the verse:

Do you not know that in a race all the runners run, but only one receives the prize? So run that you may obtain it.  1 Corinthians 9:24
Little did I know at the time this theme was decided on that I would be training for and running in my first marathon 6 months later. Yes, me, who has hated running for as long as I can remember. No track and field, no basketball, no soccer for me growing up. I was a springboard and platform diver. You don’t find too many sports with less running than that!
However, I set aside my loathing for running to take on a new challenge with my 2 sisters—running 13.1 miles in the P.F. Chang’s Half Marathon. The race took place just 9 short days ago and as I reflect on the adventure, I realize that I learned some valuable lessons along the way.
13.1 miles is a long way
I know, I know. There are some crazy folks out there that like to run extreme marathons that are 100 miles long, uphill the whole time, in the snow, while barefoot.  Let’s just continue with an assumption that to most people, 13.1 miles on a relatively even plane, in the sunshine, while wearing running shoes is still a pretty challenging feat.  The conditions during the race where pretty perfect. It was not too hot and not too cold. The sun was shining. People were cheering and holding signs of encouragement along the way (I’ll address that later). Music was playing and adrenaline was flowing. I had TRAINED for this! But it was hard! Every mile seemed to get longer and longer. There were times when I was sure I had simply missed the mile marker sign indicating I was one mile closer to the finish. Alas, 5 minutes later, I would see the mile marker sign up ahead.
As I think about the spiritual race that we are running, it can sometimes feel like it is never ending.  Even when the sun is shining and the conditions seem pretty perfect, the race itself can be exhausting. Just when we think we have “made it” we realize that our race is far from over.
Sometimes you need a GU
You may be wondering what in the world a GU is. Don’t worry. I asked the same question 6 months ago. A GU is basically an energy boost that runners need to take during a race to replenish their energy stores. Your body literally eats up every ounce of fuel it has and needs something else to burn. Runners recognize that these little packets of strawberry banana, or coffee-delight-flavored goop are necessary when their energy is drained.
So I ask you, what do you do when you need a GU in your spiritual race? Do you make time to meet with that special friend that can speak encouragement into your life? Do you make it a point to go on the church retreat to just get away for a little while? Do you finally say “no” to one more thing that just makes your plate overflow? We all need to recognize our tendency to burn out and understand the necessity of a spiritual energy boost from time to time.
“Be the signs” along the way.
Having never run a marathon before, there were a few things I didn’t know to expect. One of those things was the signs people held along the way. What an odd thing it was to see strangers cheering me on. Yes, some people were there to cheer on their family members and friends, but certain groups were staged along the way just to be a cheering section. People would look straight at me and say things like, “Keep going! You’re doing a great job! You are almost there!”
Some of the signs that gave me the biggest laughs were:
“Run, Random Stranger, Run!”
“Worst Parade Ever”
“Run like you stole something.”
“Stop reading this and keep running!”
“Smile, you’re still faster than all the people behind you”
All of them brought a smile to my face, but they made me realize how the smallest words of encouragement could make the next mile that much easier. Are you an encourager? Don’t forget to see the people running the spiritual race around you and tell them, “Keep going! You’re doing a great job!” You never know how far those words will go.
The Finish Line 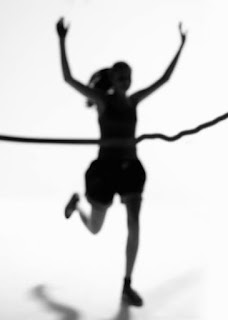 I have to admit that even in mile 1, my #1 goal was the finish line. All I cared about the whole 13.1 miles was getting to end and saying “I did it!” More than that, I knew my husband, my girls, and my family would be there to congratulate me.

How much greater will the feeling of victory be when we complete our earthly race and see the Lord face to face! As excited as I was to hear congratulations from my family, I am far more excited to know the following:
“I have fought the good fight, I have finished the race, I have kept the faith.” 2 Timothy 4:7
“Yes, I won the race.”
The first thing that my 4 year old said to me when I met up with my family after the race was, “Did you win, Mommy?” My response without hesitating was “YES!”
I may not have gotten first place, but I ran to receive the prize. I ran the very best race that I could and just finishing the race was the ultimate reward! It is my heart’s truest desire, and hopefully yours as well, that we would run our spiritual race to our very best ability as well. Take a GU along the way and be a sign of encouragement to those around you.  Let’s fight the good fight and finish the race. No matter how long the race feels, race to win the prize with your eyes ever watching and waiting for the beautiful finish line.